The ASI Air Cargo team is experienced in all aspects of the sector. ASI’s experience is that no single factor determines a successful program. Factors such as facilities, airport costs, service costs, work force skills, competition, tariffs, trade barriers, financial incentives and/or many other must be considered. ASI can provide strategic consultancy, assessment and competency development in all aspects of the Air Cargo industry: 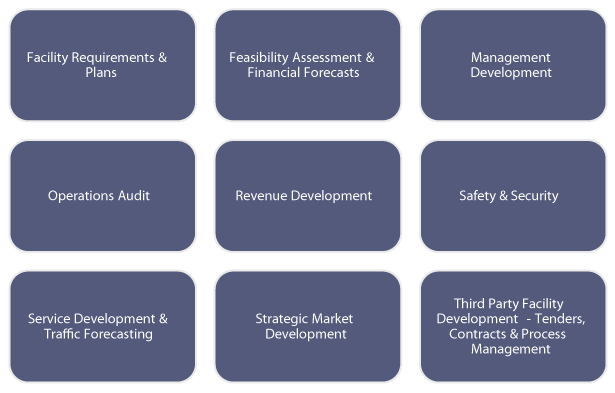 Cargo Terminal Development Assessment
Québec City Jean Lesage International Airport, Canada
The Eastern part of the Province of Québec had no real cargo facilities and all cargo was transported to points further west. A study to evaluate the potential for a new cargo warehouse and handling facility was conducted. The study led to a new multi-modal facility at Québec City Jean Lesage International Airport, handling shipments from major shippers in the East.

Air Cargo Assessment
Macau International Airport Company Limited, Macau
ASI conducted an examination of the air cargo facilities, services, and opportunities for the Macau International Airport Company Limited. The objectives of the evaluation were to analyze the air cargo situation at the airport, discuss future air cargo demand, analyze ancillary services in place, and provide a preliminary assessment of demand for air cargo. The final report included a review of existing facilities and research on potential cargo development opportunities.

Cargo Terminal Development Assessment
Cluj-Napoca International Airport, Romania
In light of the tremendous growth experienced at Cluj-Napoca International Airport, it became essential to review the needs of the manufacturers in the region like Nokia. ASI completed an assessment of the potential for cargo business for the airport, including forecasting, analysis and recommendations, all leading to improvement of cargo services and operational efficiencies.

Air Carrier Planning and Operations
Concordia University and Beijing University of Aeronautics and Astronautics, Canada and China
Under a partnership between Concordia University, Montreal, and the Beijing University of Aeronautics and Astronautics (BUAA), China, a course entitled on Air Carrier Planning and Operations was developed. The course was delivered within the Aviation MBA offered at BUAA and included a section on the benefits of cargo handling for air operators.

Strategic Planning for Increased Participation
Logistics Foundation of America (LFA) and the American Society of Transportation and Logistics (AST&L), United States of America
Strategies to increase educational and certification programs as well as membership participation were developed and implemented. The Boards were assisted to determine which business arrangement would best meet their stated goals and objectives. The financial analysis included internal rates of return on various levels of participation and calculation of various rates and charges.

Air Cargo Assessment and Strategic Air Service Development Program
The Grand Bahama Airport Company Ltd, The Bahamas
An analysis of the island’s air cargo service conditions was conducted to determine service and asset gaps/strengths within: existing air service, facilities (both on and off airport), rates and charges, economic activity, emerging industries, and competing airport activity. Determinations were suggested on the best uses for undeveloped ramp-accessible land and the preferred approach to facility development was explored. An air cargo development program was consequently developed and implemented, expanding market awareness of niche cargo opportunities within the region.

Cargo Terminal PPP Development
Grantley Adams International Airport, Barbados
A cargo development plan was developed for Grantley Adams International Airport, including: a make or buy business case, the development of tender packages for a private FBOT development of a cargo terminal, management of the tender process, and selection of the private operator. Following the operator selection, the Government of Barbados decided not to proceed at that time. The project was funded by the Inter-American Development Bank.

Strategic Business Development
Greater Moncton International Airport, Canada
Moncton, centrally located in Atlantic Canada, was facing rapid growth. ASI was asked to prepare a strategic development plan for Greater Moncton International Airport, with a particular emphasis on cargo development. A review of the existing potential was conducted, including an inventory of cool/cold rooms, in-bond storage, and other similar facilities. The study enhanced market potential and improved handling facilities to support the development of a cargo complex at the airport.

Cargo Hub Operation
Canada
Atlantic Canada was linked to the rest of the country primarily by truck. A decision was made to establish a cargo-hub operation in Moncton, centrally located in Atlantic Canada. Facilities were planned and developed to meet requirements. Schedules of freighters in and out of Moncton, under a 24-hour operation, were prepared. Innovative approaches were developed to ensure that facilities were provided at minimal cost.

Cargo Express Services
Air Canada Headquarters, Canada
Express Cargo was handled through a fleet of trucks and employees of the airline. The mandate was to develop a new distribution system for “express cargo” (franchise approach) for national operations. This would allow the employees to become entrepreneurs, each operating his/her own area. This innovative concept was considered by the airline.

Sea-Air Strategy
Vancouver International Airport, Canada
A Sea-Air Strategy was developed for the Vancouver International Airport to enhance cargo volumes and to increase competitiveness of the airport in the air cargo market. The strategy included: an in-depth assessment of cargo unit values; identification of higher value, lower weight, time-sensitive products moving from Asia to North America by sea; analysis of the business case for the relatively shorter time ocean crossing to Vancouver; and preparation of a marketing plan for using Vancouver as a transfer point from sea to air for delivery of selected products to their end destinations in North America. The implementation of the strategy contributed to a substantial increase in cargo volumes handled at the airport.

Cargo Freighter Operations
Air Canada, Canada
A freighter operation from Toronto to Caracas for a car manufacturer was too expensive due to the empty return of the aircraft. An added stop in the Dominican Republic was developed to bring agricultural products to Toronto. The cargo freighter operation proved very successful, allowing the sustainability of the Toronto – Caracas flight segment.

Cargo Product Development
Air Canada Headquarters, Canada
While a similar service was provided by Canada Post, it was thought that small gifts could easily be shipped and handled by air. This led to the development and launch of a new Christmas Express product where customers could ship Christmas gifts and other small items at very low cost during the Holiday Season. This was an innovative product offered by the airline that led to other similar approaches.

Cargo Prorate Agreements
Air Canada Headquarters, Canada
With the greater centralization of air services in Canada and the relative dominance of Air Canada, it became important to secure the feed with agreements with regional airlines. This involved developing a structure of rates allowing sustainability of both the network and the feed routes. Negotiating inter-line handling agreements and prorate fees with those connector airlines and other partner networks took place over a period of nearly one year. The agreements that were reached solidified the cargo services network in Canada.

Air Cargo Development Planning
Pan American Logistics, United States of America
A niche air cargo program was developed to take advantage of a specific gap in air cargo transportation between ‘non-traditional American gateways’ and Latin America. The implementation of the new cargo service captured a portion of air cargo business between the United States and Latin America. The scope included the determination of: the influences on and trends in historical air cargo activity; the characteristics of perishable-related activity in the region; the current cargo operations, constraints and projected needs; and the current use patterns of regional facilities. Estimated air cargo activities and recommended actions to be taken over the next five years were also provided.